The American Heart Association (AHA) and the Shakopee Mdewakanton Sioux Community (SMSC) convened representatives from 41 national philanthropic organizations on October 14-15 in Minneapolis. Participants focused on the grave problem of Native American nutritional health and agreed on key steps and planning to develop solutions. 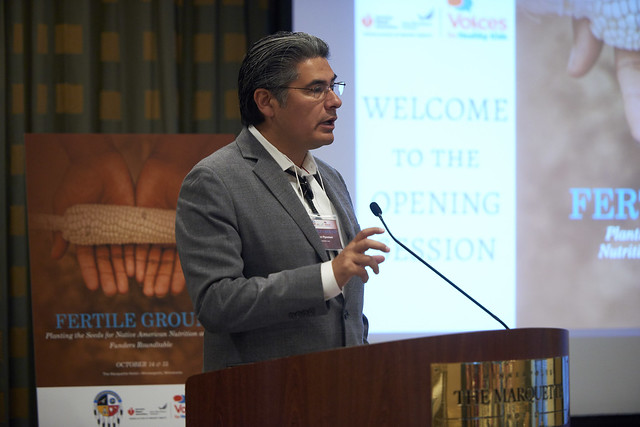 “This discussion around Native American agriculture, healthy food access, nutrition, and dietary issues was unprecedented and desperately needed,” said SMSC Chairman Charlie Vig. “At the roundtable, major players in philanthropy explored actionable strategies to support capacity building efforts, to invest in research and advocacy, and to empower Native American communities to ensure culturally appropriate solutions to this crisis. The concrete next steps that resulted from this convening will help move Indian Country forward.”

“Last week’s roundtable was an historic, breakthrough, moment for dozens of organizations seeking common ground to address nutrition and health across tribal nations” said Nancy Brown, CEO of the American Heart Association. “These families in Indian Country need our support, resources and expertise, and we’ve taken an important step in getting them on the path to improved health.”

Participating organizations included those that have robust Native American philanthropic portfolios, as well as those that are new to making targeted investments in Indian Country. Major national foundations included the Robert Wood Johnson Foundation, Margaret A. Cargill Foundation, Clinton Foundation, Bush Foundation, MAZON: A Jewish Response to Hunger, and the Northwest Area Foundation. Attendees also included high-ranking federal health officials from the United States Department of Agriculture, the Centers for Disease Control and Prevention, and the Indian Health Service.

The impetus for the first-of-its-kind gathering came from the SMSC’s Seeds of Native Health campaign to improve Native American nutrition and from the recent release of Feeding Ourselves, a comprehensive report commissioned by the AHA and Robert Wood Johnson Foundation that examines the barriers to food access and their link to health disparities in Indian Country. Echo Hawk Consulting, the firm that produced the Feeding Ourselves report, developed and guided the Fertile Ground event as part of the SMSC and AHA’s ongoing work to improve the health of tribal nations.

About the Shakopee Mdewakanton Sioux Community
The Shakopee Mdewakanton Sioux Community is a federally recognized, sovereign Indian tribe located southwest of Minneapolis/St. Paul. With a focus on being a good neighbor, good steward of the earth, and good employer, the SMSC is committed to charitable donations, community partnerships, a healthy environment, and a strong economy. Having donated more than $325 million since opening its Gaming Enterprise in the 1990s, as well as providing more than $500 million in economic development loans to other tribes, the SMSC is the largest philanthropic benefactor for Indian Country nationally and one of the largest charitable givers in Minnesota. The Seeds of Native Health campaign to improve the nutrition of Native Americans was launched in March 2015 with a $5 million contribution from the SMSC.

About the American Heart Association
The American Heart Association is devoted to saving people from heart disease and stroke – the two leading causes of death in the world. We team with millions of volunteers to fund innovative research, fight for stronger public health policies, and provide lifesaving tools and information to prevent and treat these diseases. The Dallas-based association is the nation’s oldest and largest voluntary organization dedicated to fighting heart disease and stroke. To learn more or to get involved, call 1-800-AHA-USA1, visit heart.org or call any of our offices around the country.